As it’s been a while since I’ve done any truly creative writing I thought that it would make a nice change from the regular blog articles I tend to write. Inspired by i09’s “Concept Art Writing Prompt” encouraging readers to write a story about the picture I decided that I should try the same. So after some searches on Google I picked several pictures that intrigued me and set myself the challenge of writing a story relating to the picture. So without further ado here is picture #1. 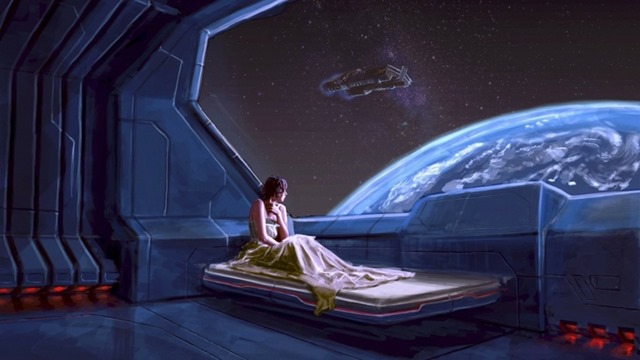 Perisa slowly stirred from her slumber. Her head felt fuzzy, vision randomly blurring, the taste of dried blood in her mouth. She tried to sit up but immediately felt feint and had to draw herself upright slowly.

“Where am I?” she thought to herself, her head still throbbing. The room was spacious and had a metallic surface smooth to the touch. She could hear a feint background humming along with the gentle hissing of the ventilation system.

As she surveyed the room her gaze was drawn to the large slanted window to her left and her eyes grew wider on seeing the view. She was hovering far above the planet’s surface in orbit. A short distance away another ship was in orbit.

“What happened to the rest of them..? How did I get here?” she muttered. Recalling the searing pain she had felt she looked at her thigh which appeared to be completely healed and not the tangled mess she saw in her mind before passing out.

A door slid open and a man entered. Perisa turned her gaze towards him and studied him. He was middle aged with a greying goatee and was wearing a blue uniform. On his shoulder was an insignia of twin serpents intertwined in a helix. He must be a medic she thought. The man removed a device from his belt clip and pointed it towards her. The device emanated a series of noises while he studied the display, his facial expressions sending out a sign of approval.

“Well you appear to be making good progress” he said.

“Tell me what happened… All I can remember was being with several others before there was a flash” Perisa said anxiously.

“And you cannot recall what you were doing on the planets surface?” the medic enquired.

The medic paused briefly and remarked “It’s perfectly natural for patients to experience some memory loss after such an incident.  We find it best to apply a memory inhibitor to aid the initial stages of the recovery process. Now that  you’ve regained most of your cognitive functions I think you are ready to know the circumstances” he added.

“Your team were exploring an underground chamber on the planet below when you encountered a booby trap set by the Ancients. You were critically injured in the explosion. You’re lucky to be alive!”

“What about the others? Are they alright..?” she asked inquisitively.

“They’re being treated in separate facilities as their injuries were not as severe as yours. They’re doing fine!” he replied.

The medic pressed a button on his device and Perisa began to feel drowsy. He then helped her lie down and made sure she was comfortable. “It’s time to take a rest. Don’t worry everything will be alright” he said.

He exited the room leaving Perisa asleep. Outside the room he began to speak into the device and made his report.

“The patient’s regeneration continues to make good progress given the few remaining cells that were recovered after the accident. The body is in excellent physical condition and the mind is beginning to recall certain events. I have refrained from telling her that she was the sole survivor as hope can be a great motivator in recovery. I believe that in time we will be able to reintegrate her memories with the remaining personalities that were salvaged.”

One thought on “Room with a View”

Michael Wlach stumbled into writing after reading a careers A-Z and deciding that A-V weren't working for him... When he is not writing, he has a passion for Anime, Japanese culture, Capuccino and Curry. Living in Lancashire with he is driven to the verge of insanity his wife by his two children.